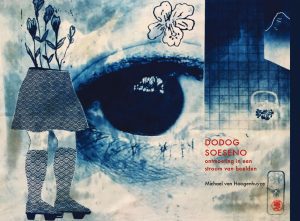 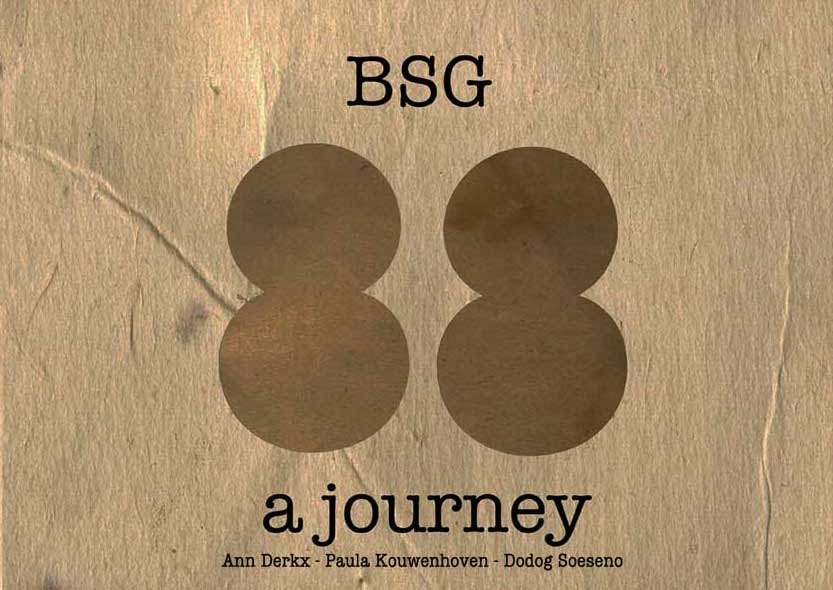 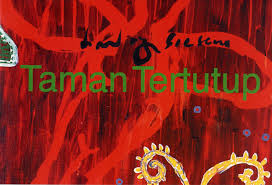 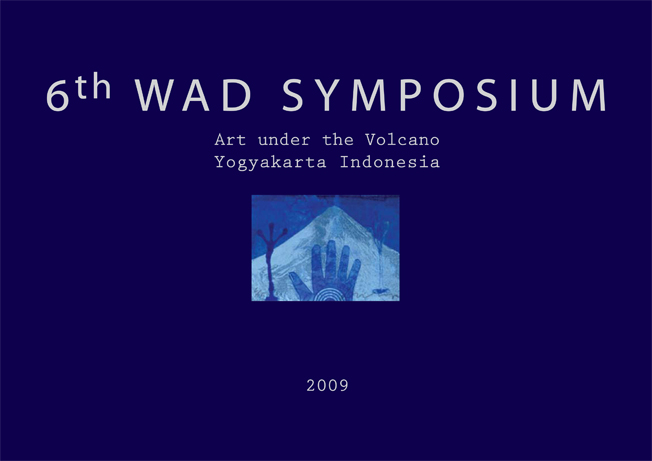 WAD – Art under the volcano 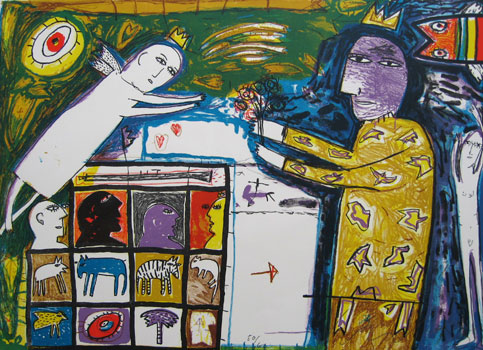 Too many dreams in short night

Dodog Soeseno is a very versatile artist. As far as his imagery and techniques is concerned he is not easy to map out. In the early eighties he came from Indonesia to The Netherlands and has since then travelled a lot between Asia and Europe. Even now he is still moving regularly between these continents for exhibitions, art projects or educational activities. His work is entwined with multiple cultures. Influences from Japanese, Chinese, Indonesian and European culture are visible.
From a technical point of view his work often is an amalgam of painting, drawing and several graphical techniques such as etching, silkscreen printing, linocut printing, cyanotype or lithography.

Once there were three friends. Dodog Soeseno, Sudaryono Sudarso and Joni Bogi.
These friends met each other as students of the Art Academy of Yogyakarta (Indonesia). They wanted to obtain a place in the world of contemporary art. Indonesia was in that time not the best environment for a plan like this. In the seventies of last century there was no place for the world of mainstream art from outside Europe. And in Indonesia it was not clear what kind of discussion about art was possible. Maybe Indonesia was too rich in culture. The recent history was extremely violent, ideals were set high in a country with an incredible diversity of languages and cultures. Almost all these cultures had their own art, specific history and extraordinary architecture. There was no tradition as a starting point, there were just too many traditions.

Sudaryono Sudarso was the son of the painter Sudarso who had taken an important place in the “school realists” at the time of Sukarno. Sudaryono had settled in Bekasi, near Jakarta, and continued the tradition of his father as a painter. Only his style changed. In a world of whirling colors he moved on the borderline of abstraction and figuration, or switched at pleasure from a figurative style to an expressive abstract language of forms.

Joni Bogi became a graphic designer but made paintings for years in his own cubistic idiom. In his work is much emphasis on a schematic lightning effect, which seem to express his paintings a strong but indefinable matter. Concrete and mysterious at the same time.

Dodog Soeseno was the promise of the triumvirate, the trumpcard. Dodog went to Europe and would flatten the road for the friends to gain reputation in Europe. However, it all went different. Dodog’s artwork got a lot of appreciation and was found contagious. In the Netherlands one recognized in his work a unique Indonesian variety of Cobra. But Dodog is not the person to put easy in a box. Rather than working on a balanced and museum work, he works hard on every project that comes his way and creates a diary of paintings, silkscreens and collages, often assembled as series in books or folders. He has become more someone who spreads his images like songs, other than an artist with an own balanced concept. So it seems. Dodog knows exactly what he does. His work can be read on two levels: as a continuing story, like an autobiography or diary, or as a continuous musical play of vitality. It seems Dodog has more responses in the Far East. Therefore he exhibits on a regular basis in Japan and China.
He has not become the forerunner the three friends had hoped for, but someone who goes his own way in the world of art. He saw Joni and Sudaryono frequently in the Netherlands. The interest for art from outside Western Europe and the United States was growing very slowly in the nineties. Artists from outside were expected in one way or another to connect with the western world. Installations , often with a social purport, could be recognized more easy than the expressions of pleasure and vitality which were more prominent in the works of the three friends.

Sudaryono died in 2007 due to a fatal disease. There is no longer a circle of friends.
The old dream seems not to be realized. Dodog stays dreaming: in his artwork. He works like a madman at his diary with his graphic art, paintings and drawings.

I have told the preceding story to make clear that Dodog is an artist of different worlds. He is an Indonesian artist as well as a Dutch graphic artist, he was the forerunner of his friends from Java, but had a complete different story to tell to the Dutch and later to the Japanese and Chinese. Meanwhile he has managed to move flexible between these cultures, to feel their content and to give his own comment.
The complexity of Indonesia had learned him to combine the different influences in his work in a very authentic way. This is still continued. In his years of study he read with his friends the Bhagavad-Gita, in his batiks he uses the spiritual world of the Bataks, but at the same time Dodog was always fascinated by aviation, airplanes and airports, and from the beginning of the pc he was caught by computer games.

Dodog’s artwork is vital. The question is: what does this mean? We all know the joy of a sound in a tunnel. By screaming in a tunnel we become aware of our voice, our presence and of the special space in which we find ourselves. This awareness can arise in all kind of different ways. It is the consciousness of a special space and of our influence through our presence. Thus we become more self-conscious. The prints of prehistorically hands on the walls of caves seem to play this role for the spectator of today. Of course we do not know why this prints are placed on the walls. But in a historical meaning these prints are special documents to us. An indefinite long time ago, earth was a rock, with water and fire. At a certain point (when?) life begins to exist. Forms are no longer defined by mechanical chains of cause and effect, but by organic processes where living units are trying to survive. Then starts the moment of men and animals . They make noises, play, pretend and give signals to each other. In the later history mankind proves his existence by signs, artifacts and even by illustrations, proves of his presence and awareness of the world around him. These illustrations have an immense force, the prove of one owns existence, and the prove that a world with others exists. Creation gets talk about itself by human ́s art. Thousands of years later vitality gives us suddenly again a glimpse of that first discovery.

The artwork of Dodog Soeseno has the same force. Sometimes it looks like walls with signs, as a prove of his existence and his way of life. The signs are like a unique language, just partly to decode. It is about eroticism, life and death, travel, and nostalgia. Sometimes you get the feeling you can ́t bother Dodog, like it is impertinent. The signs are clear and evident. It is almost impolite to make the impression that you miss the point. These series of signs seem also to handle about very private feelings. That is also rude for questioning. And thus, as a spectator, we have to struggle between knowing and not knowing, seeing the evidence and a riddle at the same time.

The pictures of Dodog distinguish themselves by big contrasts and clear colors, sometimes like the colors of sparkling jewels. He once told me the next story. If he finds a special stone on his path, he carefully takes a look at that stone, but leaves it alone. But the next time he sees the same stone, he will take it with him. Then the stone was not just lying there, the stone wants something from him. At the same time he told me that he was in possession of a fire opal. I thought it belonged to his father. “That color is so beautiful”, he said, “this is really a coincidence”. Dodog collects the things he finds on his path with the thoughts that these objects and “signs” must have a special meaning only directed to him. At the same time, real beauty is concealed in coincidence. I think that Dodog ment to say that beauty has no reason neither a cause. The beautiful color of the fire opal is just there for itself. And that makes it at the same time an important stone.

In Dodog’s work meaning and coincidence seem in a strange way the same. The clear forms and sparkling colors are solitaire in his paintings and prints, but as such act more strongly as poetic signals. They give his work an inspiring expression.

It seems Dodog plays with the symbols and pictures from his environment and his fantasy and combines these elements to a kind of inner comic stories. Because it looks like a play it works contagiously. One of the characteristics of a play is that it can be so catching, that spectators get the feeling to participate. But it is also obvious that the rules of the play hardly can be found. It is also almost sure that obeying the rules of the play would never lead to Dodog’s work.

Watching the art of Dodog we relive the Creation after all. We see how a man invents new stories by collecting symbols and signs from his surroundings and compose them to new stories about love, travel and desires. The characters appear in the paintings as if they are the first manifestation of expression, signs of life in a strange world.

Dodog is very conscious of the primal source of his inspiration. When he did exam at the beginning of his career as artist, he wrote a thesis in which he referred to the primeval universal meaning of symbols, especially regarding the fish, and used the theories of symbolism by Jung.

At the same time Dodog uses signs and symbols very pragmatic. He tells stories to himself, but also makes some kind of diagrams in order to makes his mind up about all kind of things: family relations, contact with the dead, relations, and feelings of nostalgia and desires. Dodog lives in different places and thinks constantly about the other places where he is not at that moment.

In general, the work of Dodog is a compelling adventure, a diary for himself. You get the feeling he survives by drawing and painting, and that we are the coincidental spectators of this survival process. By imagining his signs and findings, the world of Dodog keeps existing. We read these signs again and recognize partially the world of the artist and partially our own experiences. In this way, Dodog Soeseno makes our space bigger and our fantasy richer by means of a cascade of contagious images.
–
Michael van Hoogenhuyze
Art historian